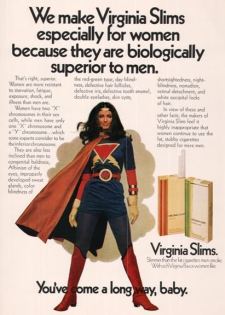 We left off yesterday lamenting the elusive female orgasm and speculating about Ellen Brody’s signature scent.

Predictably, many ads in the October 1974 issue of Cosmo focus on personal hygiene and its not-so-subtle campaign to engender women with self loathing. The Mark Eden Developer promises “A Perfect Bosom for the Girls of Summer.” My nostalgia for the word “bosom,” almost lulled me into forgetting how gross this is. Dig the breezy copy: “The Summer Bosom is high and full and firm and proud…and looks enchanting in the bright, brief clothes of Summer.” I don’t think “Summer Bosom” is a copyrighted term, but  the capitalization sure adds dignity and presence. The ellipses encourage the reader to reflect on just what it means to be “high and full and firm and proud,” while I confess that “bright, brief” evokes more than just skimpy clothes to me. It is the fleeting season of Summer itself. I am almost half tempted to clip this Mark Eden coupon out of the page and send my $9.95 & 50 cents for postage and handling to San Francisco and wait for my discreet plain wrapped package (not a cream, or artificial stimulator, but an “exclusive exerciser” that has delighted millions. One more ad before I go on to the serious discussion which a title like “JAWS” & Feminism demands.

Like signs for Burma Shave or Wall Drug that greet the traveler along the American highway, the reader navigating the landscape of Cosmo finds little ads at the end of articles asking questions like: “Do men ignore your legs because you ignore your feet?” Then a smaller, insistent sentence: “Every girl should have pretty feet.” Finally on page 261, we get to the ad which features a woman’s legs from the lower thigh down. Her knees are coyly touching, one foot is raised. The ankle is held by the hand of a nude man who reclines on the ground in a quiet, smiling “HI THERE” pose. “Pretty Feet. Because a girl should snare a man, not snag him.” Haunted by Ellen’s obsessive shaving, showering, powdering and perfuming, I read: “A girl should be soft. All soft. Not just her eyes. Or her lips. Her toe tips, too. Yes, every girl should have soft pretty feet.” I recalled the boyfriends I’ve snagged with dragon claws. The fleeting shame. The laughter. The promise to clip. The end.  How differently things play out in the advertising universe when the tiniest flaw could result in some sort of…what? Banishment from womanhood itself?

But Cosmo, is of course a big contradiction. Right next to the ubiquitous cigarette as emancipation Virginia Slims ad, is an article by feminist novelist and critic Elizabeth Janeway that boldly declares: “Not womankind but the weak among men and women alike–the subordinate, the submissive, the symbolically raped  are THE REAL SECOND SEX.”

As my students so often, so lamentably write, “This really caught my attention,” because of a section in “Jaws” that is just eye-rollingly absurd or downright offensive depending on your point of view. Will a 2014 audience understand the insane ridiculousness of Ellen declaring that her only sexual fantasy is “The usual. You know, rape,” and that her “date” Matt Hooper can barely stop drooling as he asks, “Is it a black man?” I tend to read a long entertaining disclaimer at the beginning of the reading just in case.

Maybe I should just read this article instead.

I like Janeway’s honest analysis of the psychological threat of and “visceral reaction” to the Woman’s Movement. Janeway explains that dividing the power structure of the world by sex binds men both the powerful and influential and the weak together by virtue of their anatomy. But if women are suddenly to be seen as equal to men, it sends a message to men that they can expect to be treated like women—as objects and others, not doers, but those to whom something is done:

“Closing the male/female split means a drastic rearrangement of the barriers between the weak and the powerful…the weak become the second sex–subordinate, submissive, subject to rape. (Though in our society the fear of rape by men of menus not often acknowledged, it exists, and the underlying premise is quite clear: if power has no bounds, it will extend to physical misuse. The paradigmatic act of the powerful, performed up on the weak is rape.)

Now, rape need not always be performed by force. Indeed, one of the charms of pornography is that it records session after session of guiltless rape in which the powerful are licensed to have their will of the weak because the weak “really like it that way.” Last Tango in Paris, the story of encounter between strangers offers a brilliant example of this theme. Only symbolic rape is present here, because the woman accepts subordination and asks for abuse, but we can regard it as psychologically equivalent to physical rape because the relationship  involves dominance of female by male to the point which society usually considers degrading. The heroine, who is not presented as a individual, but rather a mythic projection of “what they really like,” is deputized as wanting degradation and returning willingly to the male in order to receive it. In the end she can free herself only by violence, can win back her autonomy and reassert her identity only by killing him–leaving us with the moral that it is a law of nature for men to be dominant and the only means by which women can reverse this edict is murder. In other words, equality is nonsense and women who ask for it are dangerous fools who end up slaughtering men.”

This last bit about women resorting to violence reminds me of ANOTHER (non-Ellen Brody) moment in “Jaws” when Officer Hendricks is at his desk reading a detective novel called “Deadly, I’m Yours,” as the phone rings (a missing person’s report: nude swimmer, Chrissie Watkins, the shark’s first victim): “the heroine, a girl named Whistling Dixie, was about to be raped by a motorcycle club. Hendricks let the phone ring until Miss Dixie castrated the first of her attackers with a linoleum knife she had secreted in her hair.”

Who would have thought when I sat in a tree in my Wrangler jeans, eating Apple Stix and trying to figure out the weirdo sex passages of this book that it would yield, so many years later, such a complicated feast of gender trouble? Reading Janeway’s article helped me entertain the possibility that Hooper’s titillation was only a projection,  a symptoms of a much deeper fear of subordination and identity loss. But I still wish Ellen had read this article before she met him for lunch.