Nice views here of two white sharks, one with a lovely speckled sort of pattern on the tail. I love how they simply disappear into the green. I also love how the divers in the cage keep their feet off the bottom of the cage. There is a weird sensation of suddenly not having legs when one is deposited in the cage, followed by a desire to keep track of one’s legs as much as possible.

(Thanks again to Peter E.)

Many thanks to my “cage mates” Andria and Peter Eisenhauer for this footage of a white shark snacking on fish heads. Seeing that jaw drop down was one of the peak experiences of my life.   I love the contrast of the underwater sounds and the shouts of the crew on deck.

I’m leaving for my South Africa shark trip tomorrow night. In addition to packing seasickness pills and stacks of books for my million hour flight, I’m trying to “prepare” to meet the sharks. For example, I got a mani-pedi in a gorgeous slate gray color in tribute to the white shark’s camouflage. On a more practical level, I’ve been reading a particularly helpful volume given to me by shark legend Ralph Collier, is the wonderful book 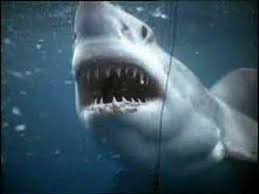 Field Guide to the Great White Shark by R. Aidan Martin.   Here are a few excerpts:

1. Do not extend your arms or any part of your body out of the cage. While observing or filming one shark, you could easily be nipped by another.

2. Even very large great whites can be very cautious or even timid on approaching shark cages and are easily “spooked.” Sharks are very aware of divers’ eyes and seem to dislike being stared at as much as you or I do. To foster the closest possible approaches by Great Whites, avoid flash photography or direct eye contact during the earliest phases of your dive. Wait for the sharks to build up their courage and approach the cage in their own good time. Once they have decided the cage and its bubbling inhabitants are not a threat, Great Whites will more-or-less ignore both to fuss their attentions on the bait or each other. That’s when you can observe the most interesting behavior and capture the best images.

3. Be aware that Great Whites have attacked boats. In some instances the boat sank; in others the attacking shark actually leapt into the boat in pursuit of pinnipeds or hooked fish.

4. This tip will come in handy if the shark destroys the cage and I have to somehow make it to the surface:

While in the presence of a great white, maintain a vertical orientation in the water column. Perhaps because most swimming animals are longest horizontally in the direction of travel, many sharks seemed more unnerved by height than length. A vertical orientation—combined with persistent eye contact—may make you seem larger and more intimidating to a Great White. 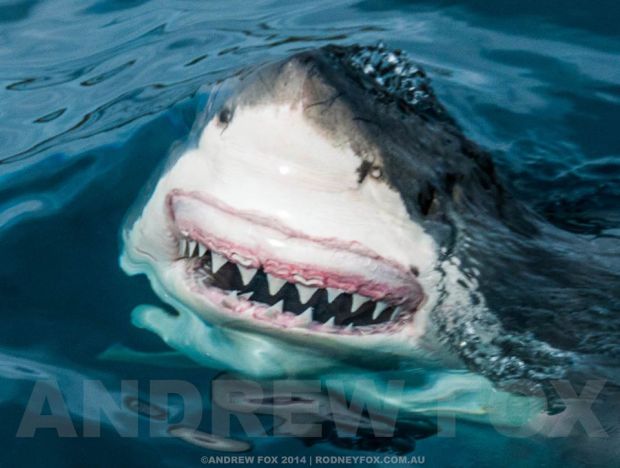 Writers aren’t allowed to say things like “words fail,” but I am still struggling to find the language to describe this face. I cannot form a coherent sentence about this image by Andrew Fox of a white shark breaking the surface in pursuit of an albatross. My brain sputters out weird fragments: “bloody clown laugh,” or “sad dream lipstick jaw.” The otherworldly quality of this animal makes me rethink my place in the universe. Maybe that explains my enduring feeling, beyond the wonder and horror, of deep gratitude towards them.

This scuba diver freaks out (in a good way) when he spots a white shark while diving in the Gulf of Mexico. I like the muffled “HEYYYY” which seems so futile and the sound of  underwater breathing which is eerily like the measured exhalations of someone in intensive care.
(Thank you, Jack Morrissey)

I don’t know  how ecologically sound  this underwater graveyard really is, but aesthetically it’s a home run. Imagine the underwater funeral in which mourners in wetsuits hover in grief and neutral buoyancy, eulogies given on chalkboard, fish feeding on watery epitaphs….

As my date with a shark cage gets closer and closer, I find myself feeling extremely, ummm..sensitive about any stories or videos related to shark cage diving, such as the Leonardo DiCaprio cage diving story I posted  last week. Then, this morning I found this story about an Australian man who decided to swim with a tiger shark wearing only a bird cage which made me feel a little less foolish and afraid.

Anyway, it’s probably good for me to read these stories. Isn’t life all about seizing the day and bucket lists and profiles in courage and doing something everyday that scares us everyday and dancing like  nobody’s watching? For me, it’s also about working through a primal fear of being eaten alive by a predatory fish although that wouldn’t sound so pithy on a coffee mug.

Andy Brandy Casagrande IV is an Emmy-winning cinematographer and shark freak. You have to love a song with a lyric like: “Seven rows of teeth, Lorenzini in the front!” 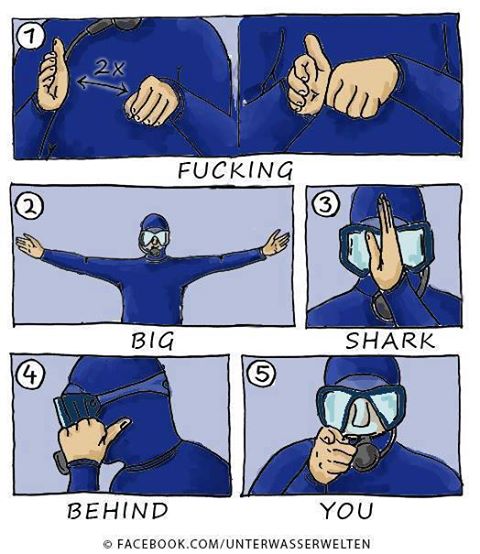 I wish I had learned these hand signals in diving class.

I just stumbled on this piece by a scuba diver and self-proclaimed atheist who found God in the eyes of a white shark off Guadalupe Island.

I needed an epiphany like this to heal the horror of a student presentation given in my 10:40 class. After outlining the habitat, biology of the endangered scalloped hammerhead shark, the student played a clip in which some smug idiot catches a juvenile scalloped hammerhead and holds the small shark on the deck pointing out its distinguishing characteristics while the fish gasps, thrashes and finally dies on camera. I felt like placing a bag over the man’s  head and asphyxiating him while calmly identifying the major appendages that identify him as a Homo sapiens.

My meltdown drowned out the asinine anatomy lesson.  I tried to turn my rage into a “teachable moment.” As the shark’s death seemed to happen in the name of education,  I talked about the destructive “research” of OCEARCH and urged the class to write about corruption in marine conservation. “Please tell me,” I said to the darkened classroom, “how I can continue to witness things like this and not become totally hopeless. Can you guys answer that on the final?”

“It’s like zoos,” one girl said. She didn’t elaborate, but I guess I understood.

Lou Reed was right: “You need a busload of faith to get by.”

But sometimes faith involves more forgetting/denial than it does hope.

Lou Reed also said “that caustic dread inside your head will never help you out.”

A conscious rejection of too much negative thinking is another necessity of “getting by.”

Lou Reed’s death leaves me feeling a bit lonely for this kind of immediate connection, this ability to cut fearlessly through to the truth.

It makes me want to be less straitjacketed by wanting to be liked and not being afraid to show how incredibly angry and sad all this stuff with animals makes me feel without trying to wrap it in what David Foster Wallace called “rhetorical niceties.  But I don’t want to rant self-righteously either.  I hope I can find some place in the middle of anger and reverence, joy and despair that isn’t too middle of the road.