So glad that one of our great American poets has finally tackled the mystery of that sweet American horror….

Rocket-shaped popsicles that dyed your lips blue
were popular when I was a kid. That era got labeled
“the space age” in honor of some longed-for,
supersonic, utopian future. Another food of my
youth was candy corn, mostly seen on Halloween.
With its striped triangular “kernels” made
of sugar, wax and corn syrup, candy corn
was a nostalgic treat, harkening back to days
when humans grew, rather than manufactured,
food. But what was fruit cocktail’s secret
meaning? It glistened as though varnished.
Faint of taste and watery, it contained anemic
grapes, wrinkled and pale. Also deflated
maraschino cherries. Fan-shaped pineapple
chunks, and squares of bleached peach
and pear completed the scene. Fruit cocktail’s
colorlessness, its lack of connection to anything
living, (like tree, seed or leaf) seemed
cautionary, sad. A bowl of soupy, faded, funeral
fruit. No more nourishing than a child’s
finger painting, masquerading as happy
appetizer, fruit cocktail insisted on pretending
everything was ok. Eating it meant you embraced
tastelessness. It meant you were easily fooled.
It meant you’d pretend semblances,
no matter how pathetic, were real, and that
when things got dicey, you’d spurn the truth.
Eating fruit cocktail meant you might deny
that ghosts whirled throughout the house
and got sucked up the chimney on nights
Dad wadded old newspapers, warned you
away from the hearth, and finally lit a fire. 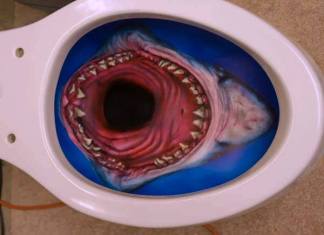 This shark toilet is so grotesque that I feel obligated to balance the horror with a little spirituality.

If you’re obsessed with sharks like I am, you might have wondered why they manifest in your dreams, plague your waking thoughts and perhaps even haunt your toilet.

Check out this fascinating discussion about shark symbolism.

It may inspire you to start a new religion.

On Tuesday afternoon, walking to the parking garage after work I passed a perpetually trash-strewn patch of plants and stopped to free a Macy’s bag impaled on a  thorny branch. Grumbling with fatigue, heat and misanthropy, I snatched the bag and tossed it in a trash can, not feeling quite self-righteous enough to recycle.

In the trash barrel, I noticed a tiny card from a children’s game. Delighted, I snatched this vintage treasure from the bland refuse that surrounded it. The illustration showed a fisherman hauling a net of blurry colored trash from the edge of an unseen sea. I found the title vaguely obscene: Salty Junk. I couldn’t imagine where the hell this old sod had come from. All I thought of was a haunting story I’d read in the New York Times about the debris field left by the Malaysian plane that crashed in the Ukriane, how the writer reconstructed passenger stories through objects: Bali guidebooks, passports and a scattered deck of children’s playing cards.

I tried to engineer a reverse synchronicity in my mind to make the discovery feel inevitable. Hadn’t I just been thinking of how I’d make all of these entries into a book?  Hadn’t I just been thinking, how much I’d actually enjoyed cleaning the little piles of dead balloons and tar balls off the beach, especially when my friends came with me? Could the universe, my throbbing narcissism insisted, maybe be acknowledging me for my own modest harvests of salty junk?

My love for piles of free and abandoned things aside, I don’t know why this little card had the force of revelation to me. I dug through the can, but found no other tiny red cards among the Subway wrappers and coffee cups.

The Wednesday walk to my car was similarly uneventful. But today, past the trash can where the concrete sidewalk curves up the hill, I found another tiny red card  face down on the ground. I turned it over as if awaiting a revelation from the Tarot. There she was: Wacky Witch like some emissary from childhood classrooms dressed up for the New England fall, the green faced dime-store hag with cat, owl and cauldron, her leering face somewhere between a comic strip and a tribal mask.  I scanned the brush for more cards, but found nothing. To what scattered and abandoned game these old icons belong I will never know. But I sensed their odd, intermittent path was something I was meant to follow. 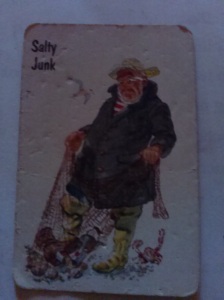 How did this 1981 gem, “The Last Shark,” (a.k.a. “Son Jaws”) ever escape my attention? A quick skim through it reveals lots of people are wearing satin and visors, a guy with an overgrown Robert Shaw mustache and a mayor who refuses to believe the truth. There’s lots of murky underwater shark action, but the Universal Studios style predator reveals himself fully at 1:16 09.

I so prefer the low-tech Batman to the chiseled existential angst of the latter day ones. I also love the thump of Batman’s fist against the hollow rubber body of the shark.

This probably isn’t even “bad-good” but what the hell….I like the look of fins cutting through snow.