Meditation is a strange thing. It can take you to some surprising places. There are the meditations when I “go deep” like David Lynch talks about in his book on creativity and meditation “Catching the Big Fish.” Then there are the meditations in which I keep thinking, but more in pictures than in words. Still thoughts. Still coming and going. But pictures–fading like slide shows or lingering like living dreams–actual places I can travel to.

I was listening to some music that is supposed to open the heart. Sometimes it’s hard to tell the difference between healing and shutting down. Both involve a certain kind of closing. So tonight I thought I had better think about opening whatever it was in me that might have closed.

As I sat with my eyes shut, listening to this wordless music, head lolling like the helpless subject of an B-movie hypnotist, I began to smell evergreen trees. A very old and specific scent of Christmas branches wrapped in white paper. My sister Janet was sentimental, a record keeper. When we found a particularly beautiful tree, a full, robust tree, she always clipped a branch from it. Sometime in early January, she would put it away with the ornaments wrapped in white paper. The next year we’d find it rust-colored, the emissary from a previous December, a once glorious now sad and ancient thing. I used to think that the branch was an example of Janet’s excess–that her desire to catalogue and organize and preserve every experience from a movie matinée to a play list from a Bruce Springsteen concert was noble, understandable, but often too much. A gilded lilly. But because Janet died before she was 40 years old, I cannot help but think that  she saved things because some part of her might have wordlessly understood that, as Rilke said, she was meant to “disappear early.”

And then from our childhood house I found myself on a little rise above the pasture. I am standing by the water pump. The night is so quiet and cold and the moon has made everything almost a metallic silver. Even the wood of the gate looks somehow like metal. The moon has a wreath of frost around it. And the stars–I can see them all. The sky is cold. It is so quiet in the New Hampshire night that I can hear the horses chewing the hay in the field. I can hear their lips thudding in the dark. I never want to come back to Los Angeles where I never see stars, where it is never so quiet as to allow a person to hear all the many variations on the word “rustle” where it is never so cold that the water freezes in the pump.

I am so confused about time. Was this so long ago? I was there. I remember the cold light. The little hill and the horses. Maybe eight years ago. I stood in the dark on the little rise and I listened to the horses and saw my own breathing. I looked at the stars. And now I am stunned–not so much that it is over–the horses, the house, the fields, the winter nights that I would volunteer to go out to the barn and fetch the buckets and plunge my hand into the deep scented darkness of the grain bin–all of these pleasures, pure pleasures–but that they ever happened at all.

Part of what meditation does is to help us, through silence, merge with something greater. To step out of language and into that infinite, often blissful place. In those meditations that enter the big silence, I  feel transcendent. Free from language, free from identity, free from linear reality.  Sometimes the darkness seems to move, to part, as if I am traveling through it.

Other times meditation  plunges me into some very specific places. Like the little hill above the pasture. Maybe I was meant to see moments like this as more than “a memory,” but a state of being fully alive. Did I not feel a oneness with all things as I stood listening to the hay move and the tails swish and the hooves stamp? Did I not feel complete as I looked at the moon and the frost? Did I not know a wholeness as rich and true as any mystic when I stood upon that worn hill and listened 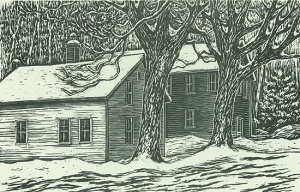 –my eyes open in the dark.