A while back I posted a shark painting from Dave White’s Apex series, but today I went to see White’s show at the Gusford Gallery on Melrose in Los Angeles.  White’s 12 oil paintings of white sharks in motion are the most dynamic, beautiful and haunting shark images I’ve ever seen. Maybe it has something to do with his use of color (the purple stains that evoke both bruises and the color of the cosmos), but in “Apex,” White has tapped into that eerie eternally shape-shfting beauty and horror, grace and force that is the great white shark.

Each one of White’s numbered fish (“Apex l-XIII”) has a specific presence, personality and gravity. Like their real-life counterparts, they are perfectly, serenely adapted to their element. Composed of  light and dark blues and purples, with energetic brushwork and blobs of black and white, the texture is thick when evoking the mass of the animal that has been alternately described as a “tank,” “freight train,” “submarine” and “bus.” But this heavy color is often balanced by a thin sheen near the gills and along the back that evokes both the  massive shark’s surprising elegance and light filtered through the ocean’s surface.

Up close the skin of these sharks comes alive with a fury of thin lines, swipes, surprising dots and splatters that recall the chaotic scratches and battle scars that mark shark snouts in the wild. Each shark bears a unique mouth. “Apex V,” for example, has a grinning of unsettling pink maw somewhere between bubblegum and flesh. Michelle Schultz, Gusford Gallery’s warm and helpful director told me that patrons had dubbed “Apex V” the “Finding Nemo shark” on account of his smile. “Apex VII” and “Apex X” (shown above) have gobs that look like microcosms of the sea itself, the teeth like frantic white caps or the sails of doomed vessels. And the eyes! Ringed with half circles of lavender, or a hair-thin line of white, these aren’t the  “lifeless doll’s eyes” of Quint,  but orbs animated by a much more enigmatic intelligence that marine biologists have struggled to define.

Perhaps because “Apex XI” has blue and white skin like the Milky Way, I imagined sleeping on the gallery floor with all of these sharks floating above, their long drips of color seeping into my dreams.

“Apex” ends June 21, so if you’re in the Los Angeles area go, go! And if you’re not near L.A., it’s worth a pilgrimage, not just for shark lovers but for anyone who enjoys great painting.

I really like that this piece by Lily Williams  addresses the horror of shark finning and its consequences and somehow manages to be playful.

(Thanks for finding this Ani!) 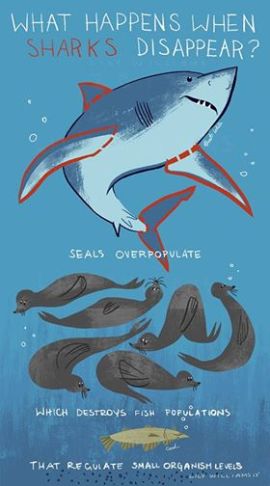 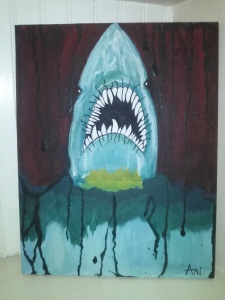 It’s a pretty big deal when someone paints a painting for you. So yesterday when my former student  Ani gifted me with this picture, I was, as they say in England, “dead chuffed.” Ani wasn’t even a “shark student” of mine, she took my literature class last fall. Like me, Ani loves the Beatles. Unlike me, she is incredibly together at 22 years old.  She runs a cake pop business with her sister. She writes poetry and has an untainted enthusiasm for language and literature that I admire, sometimes wistfully.

One day after class, Ani showed me a poem she was working on. The poem centered around a pomegranate, a powerful symbol of love, death, renewal and the feminine. I remembered that Pre-Raphaelite painting of Persephone holding the pomegranate in her hand. I recalled the pomegranates on the funerary sculpture of the unmarried women in Ancient Greece.   But Ani wasn’t thinking of all that symbolic stuff when she wrote the poem. She just wrote it. The poem had a lovely, strong female voice, both archetypal and modern.  It made me shiver a little. We talked about the poem for a while–about Persephone, about Armenian history, about images vs. words until afternoon shadows lengthened and it was time to go.

As soon as we stepped outside the classroom, we saw a young guy sitting on a bench. He pulled two pomegranates out of his sweater and handed them to a friend. Ani and I both shrieked with delight.

Had Ani’s poetic invocation caused them to surface in the real world? A correspondence between Ancient Greece and Glendale, California?

I like that this shark seems to be on some sort of dream stage, rising in front  of a curtain of blood. The title is “A Breath of Fresh Air.” The shark seems both to bringing this much-needed freshness to the world and rising out of this dark and light aqua sea in search of it. And the more I look at the deep, rich red background, the more I think of pomegranates and marvel at the palette of images, colors and words we share across time. I like to think of the language we employ and all the echoes it carries. Sometimes this echo is a burden, miring us in old stories we’d like to forget and other times that resonance is the tremor of eternity we need so language becomes a living thing, closer maybe to music.

Lovely things can happen when someone lets you into their poetic process. It doesn’t happen every day.

So thanks Ani, for the poem and for the picture. 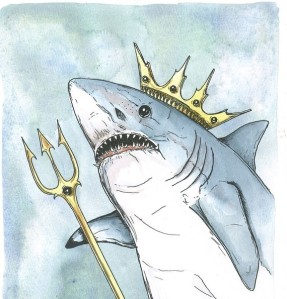