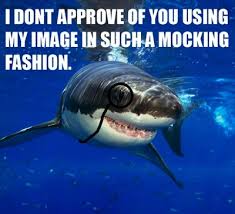 Reviewing the student responses to Ralph Collier’s lecture, I’m pleased that the majority wanted to hear more about shark conservation and that Ralph’s amazing stories about great white behavior made many of them realize that “fish can be smart.”

Ah students! They invent such striking turns of phrase. Ralph showed a video of a shark releasing a cloud of waste over a diving cage, and someone referred to this phenomenon as the “shark farting.” This was no fart. The shark rained shit and piss, but I have never read the words “shark” and “fart” in close succession and I must say there’s a playful musicality to the term.

I figured I get a lot of “pray” instead of “prey” (or even “preys”),  for this assignment, but this sentence exceeds my expectations: “Mr. Callier explained how sharks can be very specific with where they hunt their praise.”

When a white shark sinks his teeth into the edge of a kayak, is he simply saying, “Look at me, for Chrissakes. Love me as I am–with my lurid gums and sandpaper skin and efficient torpedo design? How many more femoral arteries do I have to sever to get a little attention?” 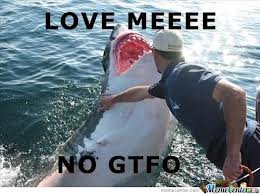