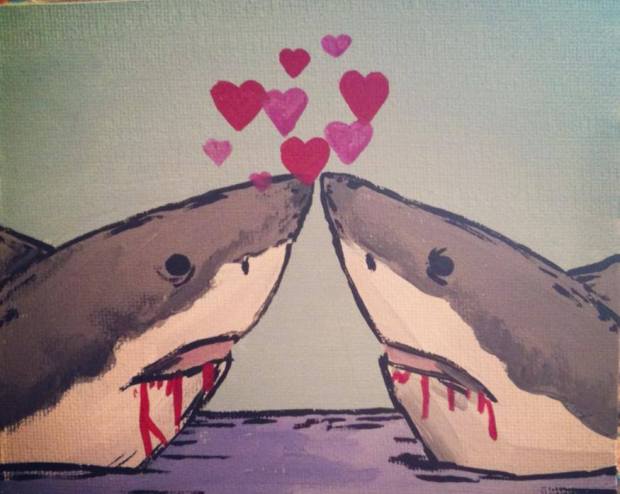 I had to remind myself to take a deep cleansing breath when I noticed a few of my students texting during “Jaws” today. Later, one of the guilty boys confessed the movie was “just too scary” and with the acute senses of a predatory fish (or a fellow neurotic), I detected residual fear in the shuffling way he gathered his books and hid his eyes behind a lank of  dark hair.

Several people laughed when the bereaved Mrs. Kintner slaps Chief Brody in the face for keeping the beaches open and letting her son Alex get chomped. Is this a kitschy moment? Perhaps. But I always found the scene too odd or mysterious to be pure melodrama. The black-veiled Mrs. Kintner is accompanied by a silent old man who might be her father or grandfather and the two of them progress in some odd inversion of a  wedding march toward Brody.

As Antonia Quirke noted in her BFI essay on “Jaws”: “She’s much older than the other mothers at the waterfront. This child was her last chance” (35). Quirke also notes that a slap in the movies normally stands in for sex, but “[t]o be slapped by Mrs. Kintner in mourning is like being kissed by a skeleton, it has that disquieting taboo mixed in” (36).

The book store ran out of my shark texts which may have explained this group’s lack of enthusiasm for uterine cannibalism or the ampullae of Lorenzini. So other than typing up a quick shark biology quiz, I’ve been checking in with the STOP OCEARCH activists. Sad to hear that the New Yorker did a story about OCEARCH (thanks for the tip, Connie), but pleased to know that a film exposing these charlatans (Price of Existence) and other marine exploitation is in the works. I’ll try to do what I can to help with the fundraising/consciousness raising for this project.