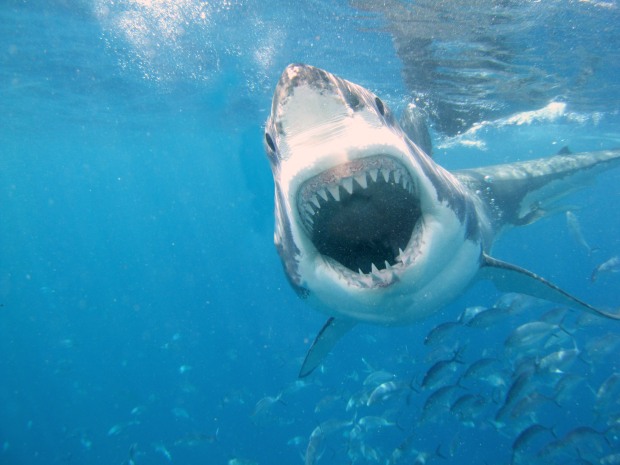 I’ve been meditating for a little over a year now. I try to do it twice a day, although I admit sometimes I miss a session or two. But my meditations aren’t limited to those periods that I sit for twenty minutes with my eyes closed. Lately, I’ve been concentrating my attention on this image of a great white. I’ve posted it before. I don’t know what exactly sets it apart from countless other terrifying images of white sharks with tooth-ringed-death-tunnel-cavern-mouths, but in this particular photo, the shark not looks as if it has ambushed its prey (the viewer?) but is itself, startled, surprised.

In my anthropomorphic projection, I read a sense of wonder in the black eyes and open mouth.

As I study this picture,  I remember something from the meditation lecture I went to a month or so ago in which Thom Knoles paraphrased the words of Guru Dev:

Transcend where you are

Go Beyond the field of thinking

After that my lecture notes are garbled, excited. Words like “simultaneous,” “integrate,” and  “alternate” fill the margins.

When I go beyond thought (thoughts largely involving “terror” and “death”), what is there besides the creature itself?  If I go beyond thought, am I then allowed to take in the silence of the shark, its essence, which feels a little like cold sea water seeping in under my skin?

Yesterday, I had students respond to E. O. Wilson’s famous line, “In a deeply tribal sense we love our monsters.” Why do we love them? I asked the class, scrawling their ideas on the board. “Because they are free,” someone shouted. “We want their freedom.”

Maybe this solitary project should become a group meditation.

I have to admit, after showing Sharkwater to my class with its gruesome finning scenes, reading about the devastating effects of shark overfishing on coral reefs, and wondering if any of my teaching or writing or petitioning or protesting was doing any good at all, I was brought back to life by these amazing spectral GIFs from  the no-doubt horrible tale of cinematic revenge known as “Ghost Shark.”

When I have more imaginative energy, I want to write a more worthy analysis of this multi-layered masterpiece…..