Friday afternoon I grabbed my inflatable shark head and drove to Cameron Elementary in West Covina to teach Gail Gibson’s kindergarten class all about sharks.  I was nervous. Bored twenty-year-olds I could handle, but I didn’t know about children. I hadn’t crossed into that strangely lovely world of tiny chairs, knee-high sinks and loping, floating handwriting since about 1973. But the kids were great. Cute. Smart. Well-behaved.  For the first part of the class I sat in a rocking chair (as befits a wise storyteller), and tried to answer their questions. Frankly, if Ms. Gibson hadn’t given me a “preview” of these sophisticated topics I would have been, to quote David Foster Wallace, “totally hosed.”

“Why do sharks live in salt water?”

“Why do tiger sharks eat garbage?”

After frantically googling the answer to the salt water question, I discovered that other 5-year-olds had pondered this very thing, but the  was a tad too complex for me to understand let alone translate into kid-ese. Another site’s explanation seemed too easy, so I opted for an evasive kind of truth about how each animal had a job to do and a shark’s job involved swimming in the ocean and eating the sick and dying so as to maintain a balance. I might have talked about sharks maintaining a balance too much, but perhaps the importance of a shark’s role in the ecosystem can’t be overstated.

I thought the tiger shark ate dolls and rocking chairs and old tires because his diet is so wide and varied that the tiger considers anything floating as potential food. I realized that this answer might be disappointing too, so I quickly tossed in a gross-fun-kid-friendly fact. “Did you KNOW tiger sharks can actually throw up their own stomachs to get rid of things they can’t digest? Their whole stomach comes out of their mouth,” I added, clearly more infatuated with this than the kids.

A boy named Maddux raised his hand. “I like to eat paper.”
In the second half of the class, the kids painted watercolor sharks. Some sharks had gumdrop teeth and fat, hunched manatee bodies. Others wore yellow crowns. Some kids drew menacing dorsal fins, while for others the tell-tale triangle appeared a mere afterthought. One girl begged to be able to paint her shark rainbow colors, though she was careful to cover the teeth in a wash of red paint. A few of these tykes are born abstract painters, obscuring all representation save for a furious, black scribble (the mouth), and slathering layer upon layer of wet color until the paper dripped.

The children sang me a song about the months of the year and showed me. They used drinking straws to show me how to figure out the ones, the tens, the hundreds. A boy in a striped sweater wrapped his arms around the inflatable shark head and kissed the lurid, toothy mouth. Priscilla carried the shark head like a battering ram. They asked me where the rest of the shark’s body was. They asked the best question of all: “Why do you love sharks so much?”

And I was happy with my answer: Because sharks are scary, and they’re beautiful. They’re ugly. Because they look  like a monster. They look like something make believe, but they’re not. They’re a miracle. They actually live in the world. 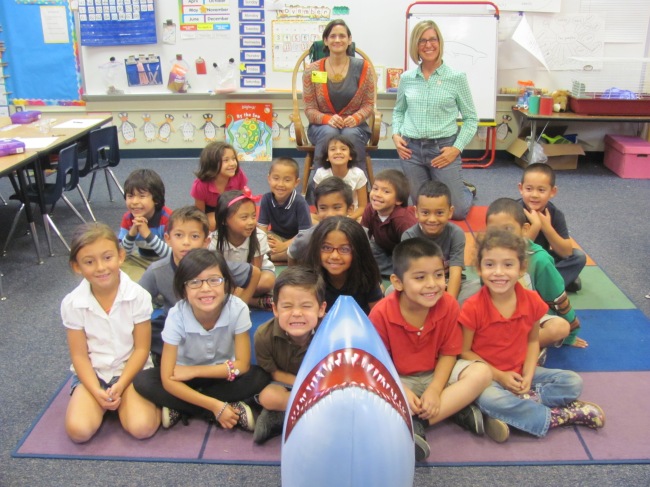