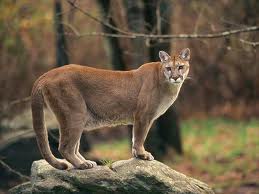 Above my desk hangs a picture from the front page of the Los Angeles Times featuring a male mountain lion standing on a dusty ridge while behind him the lights of Hollywood spread out in an undulating grid of white and gold. The combination of the seemingly infinite cityscape and this single rugged, wild creature is powerful and sad. The lion is traversing a rapidly disappearing edge of land separating city and nature. As new human settlements zigzag up the sides of the dry hills, more animals are pushed out.

I started the day reading a story about how three cubs born recently in the Santa Monica mountains were inbred, a bad sign for this tiny vulnerable population of wild cats with whom, as the signs in Griffith Park and Hollywood Reservoir remind me, I share the semi-wilds of Los Angeles. Sadly, the marginalized lions of West Africa face the same problem of vanishing territory and inbreeding.

Since the 1990s when the Getty Center was built, wildlife advocates have called for a corridor to be built to help the big cats and other animals displaced by this art complex with its trams, parking garages, gardens and imported marble, make their way across the 405 freeway. Last year, an adult male lion “searching for a home” successfully navigated eight lanes of traffic only to be killed when he couldn’t leap over a retaining wall topped with chain link fencing.

In my neighborhood, I see songbirds nesting in the hollow insides of street signs. I marvel at their resilience. It’s a wonder! I think, how lucky I am to witness such a charming phenomenon. But then I realize that beyond the street sign nests’ poetic value or scientifically miraculous coolness, it’s a symptom of displacement, a forced adaptation to an urban (human) world.

On Facebook, I sign anti-hunting petitions and share infuriating pictures of men (horrible) women (even worse, somehow) beaming and proud or solemn and tough, as they crouch in the snow over dead wolves or embrace enormous freshly-killed lions. If not for the prominently displayed hunting rifles, the lions might be asleep–majestic storybook kings with great, silent paws, their eyes slits of kindness.

A few clicks of the mouse later I find other pictures. At a controversial zoo in South America, tourists smile into the camera as they nuzzle living lions and tigers who appear drowsy, or completely passed out. Zookeepers offer the dubious claim that these big cats are not drugged, but so well-fed, so expertly raised by trainers, who socialize them with dogs, that their natural “wild” instincts are subdued enough to allow for picture taking and cuddling.

I met a mountain lion and her cub in Idaho in 1991. I don’t remember why I traveled to Sun Valley with my boyfriend Michael,  but at the time, we were very much interested in mountain lion conservation. We held a music benefit in L.A. to raise money and awareness. Maybe our trip was related somehow to that project.

The mountain lion I met that sunny winter day was not wild, not like the animals I’ve heard about who have stalked mountain bikers in California, or dragged deer up into the wintry treetops in New Hampshire. This puma had been used in commercials, (she might have been in one of the old Lincoln-Mercury ad campaigns), although she radiated such untouchable self-possession that I could only imagine that even the most chaotic television studio was simply a landscape she had passed through on her purposeful march back toward the wilderness that had given birth to her. The lion’s handler was an older man who seemed to take good care of her. Let’s call him Charlie.  Charlie walked the lion on long lead attached to a very heavy collar, although she seemed not to follow, but rather advance. The beautiful cat, whose name I’ve long forgotten, had an adorable cub who played in the snow nearby. We posed for a group Polaroid, Michael holding the delightful youngster who emitted sweet, odd birdlike sounds and baby growls. Charlie told me I could pet her. I lowered a hand, stiff and tentative onto her back.  Her fur felt thick and coarse, but the sensation I remember most is an energy that seemed to originate in her ribs or belly, both vibration and feeling, electric and terrifying. As she watched her baby leap and tumble in the snow, the lion mother made low, guttural sounds.

“You can pose with her by yourself,” Charlie said, once when we’d taken the group shot. Noticing my frozen smile, he added “She’s just is a little distracted right now cause her cub is here, but she’s okay.”

“I’m fine,” I said. In that moment, I understood my human place, strange lost creature that I was, standing there on the freezing edge between wildness and the world.