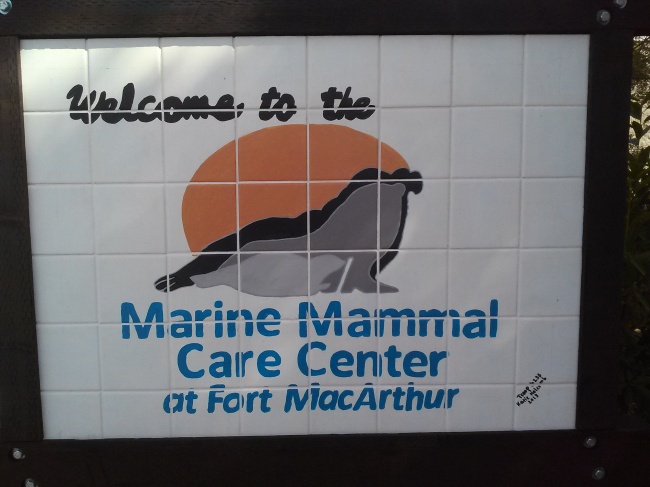 1. The pinnipeds arriving at the San Pedro rarely suffer from shark bites. The Center’s marine biologist, Chris Nagel has seen about three shark bites in five years. Most of these bites involve a stripping off of the skin. As I mentioned about a million blog posts ago, the Center treats shark bites (quite successfully) with special bacteria-free honey from South America and…duct tape.

2. The seals and sea-lion patients do suffer from marine mites, a variety of bacterial infections, and injuries inflicted by people. These include gunshots to the face, being tossed mackerel stuffed with dynamite and having their flippers hacked off by angry fishermen. Dead seals have also been found with algae-covered plastic water bottles in their guts. The most common ailment the animals suffer from–dehydration–is also indirectly, human-caused. Pinnipeds get their water from fish. Rising surface temperatures drive fish to the cooler depths. As the immature seals don’t know how to dive very deeply, they either can’t find fish, or depend on their mothers who must then go on deeper, and often longer hunts and don’t always return with food or return at all.

3. Anti-evolutionists often protest at the MMC. Even though they don’t believe in evolution, these activists express outrage that the Center “wastes” money to nurse sick and wounded animals back to health rather than “relying on natural selection.” I know, I know.

4. Some of the marine mammals that aren’t able to return to the wild, ” join” the Navy. The seals work for the military as search and rescue animals. They carry tools and identify foreign divers. Smart and cooperative, the slippery charmers are also highly social animals and rarely go AWOL. Porpoises however, are higher maintenance, and so often dubbed “The Lindsay Lohans” of the sea. The idea of drafting animals into military service makes me feel very weird.

5. Harbor seals, those spotted little darlings whose plush effigies populate aquarium gift shops everywhere, are actually really, really mean. Fur seals are also pretty cantankerous and are never returned to the ocean in popular swimming or surf spots, where they would likely bite people, but instead are transported about 40 miles out on the ocean before they’re set free.